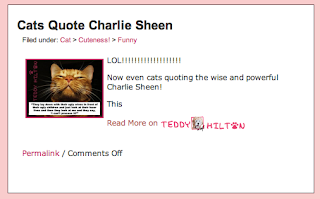 Oh, Perez Hilton. You make it so easy.

This morning, the self-proclaimed "Queen of all Hypocrisy" -- I mean, Media -- posted his support for Craig Ferguson, who last night urged people to stop making fun of Charlie Sheen. Explains Perez:

Craig points out that Charlie is obviously mentally ill and to poke fun at him is just exasperating the situation. And he has a point…one we fully agreed with. Truthfully, we know it seems easy to have a laugh at a man who calls himself an adonis with tiger's blood coursing through his veins, but if you're really paying attention, there really isn't anything funny about what Charlie is doing to himself and to the people in his life.