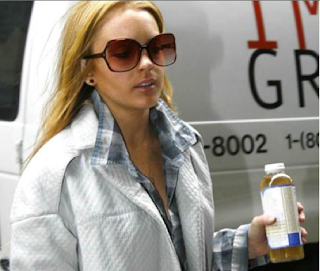 They must be pretend-devastated: The couple that their reps built, Joe Jonas and Ashley Greene, have split. The breakup comes after months of posing awkwardly for photos and pretending to be attracted to each other. According to sources, the breakup was "mutual and amicable" and a result of "their work schedules." Which, everyone knows, is publicist code for, "They agreed to fake it for 8 months and have signed papers mutually dissolving their professional relationship." Cue glycerin tears. [NYPost]

Kombucha? Gesundheit!: "Sources" report that Lindsay Lohan has admitted to her probation officer that she's been drinking Kombucha tea, which contains 0.5% alcohol or less. This is a probation violation and has been noted as such by the L.A County probation department. Jeezus, Linds. First of all, Lilo already knew Kombucha was a problem, as the beverage was implicated in her SCRAM bracelet debacle of last summer. So why is she still drinking it? The question is especially confounding to me because I have bought the tea, and if you haven't tried it, let me tell you this: don't. There are big globs of gelatinous eye-ball and snot-like material floating around in it. It's really gnarly. All to say, if Linds has managed to drink enough of the shit to get drunk, I say let her off the hook; she's suffered enough. Stupid, completely self-destructive, and unnecessarily belligerent actions aside...TEAM LINDSAY! [TMZ]

Because the god-awful writing in the books isn't enough: Here's one more reason to dread the "Twilight" franchise. Aaron Homer has been sentenced to three years probation after stabbing another man and drinking his blood. Robert Maley, the victim, had let Homer suck his blood once before, but then declined to offer up his cells for a second sucking, so Homer took his drink by force. If you want to know why these fools were exchanging fluids in the first place, you can read about it at the links. As for me, I blame Kristin Stewart. [Perez] [AZCentral]
Posted by Renée Z. at 8:49 AM