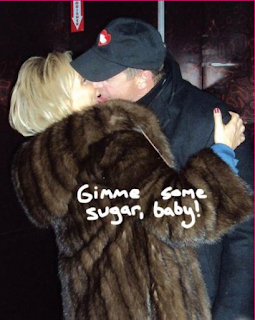 As you might recall, Lindsay Lohan is currently embroiled in a fight to stay out of jail in the face of a grand felony theft charge as well as several probation violations. While she struggles to maintain her sobriety and stay afloat, her parents are busy securing their next meal tickets. Momma Lohan is busy promoting Lindsay's brother's new film, and Poppa Lohan has been working some crazy famewhore overtime. Having ended his bromance with Jon Gosselin and consequent engagement to Gosselin's ex, Kate Major, Michael is now busy filming the upcoming season of "Celebrity Rehab With Dr. Drew." And when he isn't faking an addiction or blathering bullshit about Lindsay to the press, he's keeping himself busy with the ladies. In the photo above, we see PoppaLo swapping spit with Kim Granatell from "The Real Housewives of New Jersey." That's right. Michael Lohan and a Real Housewife. Look, all I'm going to say is this: If I were Lindsay, I'd be chugging Kombucha, too. Oh, and one last thing: nice coat, Kimmie. Jackass.

Photo (with doodle) via PerezHilton.com
Posted by Renée Z. at 1:06 PM