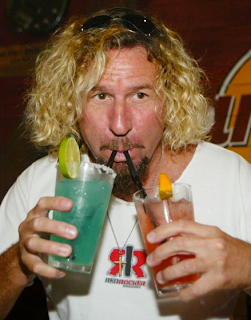 It was a bad week for fake romances: First, Joe Jonas and Ashley Greene split up. Now, it appears that Renée Zellweger and Bradley Cooper have fulfilled their contracts -- I mean, called it quits. Color me not at all surprised. I'm not sure what was in this for BCoop, but I'd bet the romance was intended to light a fire under RZell's stalled career. Um...nice try? Since these tragedies usually strike in 3s, I'd like to warn Justin Bieber and Selena Gomez: you're next, fake lovahs! [People]

Sure it was, Punkin: "It was real. Aliens were plugged into me. It was a download situation." This is what Sammy Hagar told MTV Hive about the alien abductions he has endured since childhood. And I'm sure his memories are valid, because rock stars never do enough drugs to cause any sort of confusion between reality and fantasy. You can read more about Sammy's alien experiences at the link, if you have the time. Otherwise, allow me to summarize: Sammy can't drive 55, but he can talk a whole lotta crazy. [US]

The state is in good hands, though. Really: Wisconsin Supreme Court Justice David Prosser and Chief Justice Shirley Abrahamson are engaged in a little row over the fact that Prosser allegdly called Abrahamson "a bitch." Prosser's totally pathetic defense is, simply, that Abrahamson is one. So Prosser did call her a bitch, and then Abrahamson emailed a whole slew of people telling on him. That's cool. It's not like there's anything else going on in Wisconsin, right? If Prosser needs backup, he might want to call Bam Margera. Just saying. [Jezebel]
Posted by Renée Z. at 3:28 PM