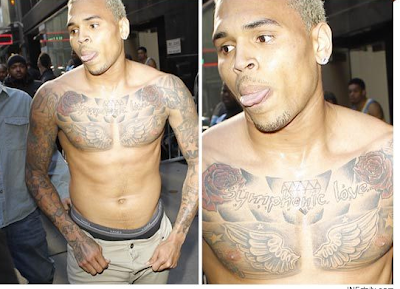 "Obviously he's gratified and he's working hard to live up to everyone's expectations." - Chris Brown's attorney, Mark Geragos, back in November, after a judge congratulated Chris on his probation progress. You may remember that Chris beat up his then girlfriend, Rihanna, and was ordered to complete community service and domestic violence counseling as a result. Yeah, well, shockingly, that didn't seem to do the trick. This morning, Breezy appeared on Good Morning America to promote his new album, and he got a little, shall we say... testy when host Robin Roberts asked him about the Rihanna "incident." CBrown tried to turn the conversation back to his album, but Roberts wasn't having it. Wow, that must have been frustrating. What's a reformed woman beater to do? Simple. Chris returned to his dressing room after the interview, smashed a window with a chair, ripped off his shirt, got in the face of a segment producer, and left the building without completing his performance for the ABC website. Here's a photo, courtesy of TMZ, of the window Chrissy broke, sending chards of glass onto 43rd and Broadway: 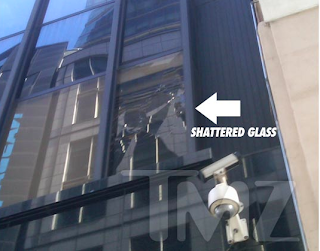 Oops! Brown might have forgotten he's on probation still and as such is required to obey the law. LIKE EVERYONE ELSE. No word on whether or not charges will be pressed. But, hey, people: he's got a new album out! Let's dance!

Stop Telling Me To Forgive Chris Brown
Posted by Renée Z. at 9:22 AM